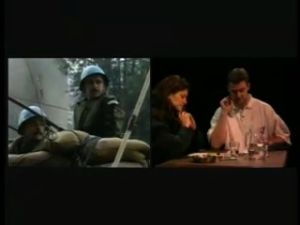 WAR STORIES is a two-monitor video instaliation. One monitor shows uncut camera-footage (about 15 mins.) from Mostar, in Bosnia-Hercegovina, on January the 9th, 1994, occasionally slowed down to reveal the ten commandments of news-gathering. The other monitor shows two actors reading through a script (about 10 mins.) about the cameraman who was in Mostar on that day and shot this footage.