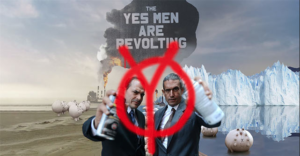 H+O Films helped out with camera work on the Yes Men are revolting documentary film. The Yes Men are a culture jamming group that use satirical performance art to make political points. While impersonating public relations personnel, they hold fake press conferences where they announce corporations, governments, and other organizations have taken a new, leftist stance. After seeing little gain from their pranks and increasing demands in their personal lives, The Yes Men debate whether they should continue. They are reinvigorated by the Occupy Wall Street protests and embark on a new campaign to combat climate change denial.