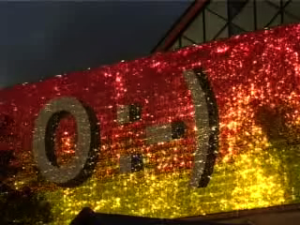 Sweeping across the vast 80 square metres of façade above the door of St Paul’s, Bow Common in the East End of London, is a fiery vision — caused by 83,000 flimsy metallic discs, each about the size of a two-pence piece. ‘Shimmer-discs’, as they are called, were used in the sixties for advertising. Requiring no electricity to make them sparkle, they were attached to a board by pins that held them in place, but allowed them to move independently of one another, so that they caught the light and together made swirling patterns in the wind. Glamorous, gaudy and sensual, they were the stuff of Las Vegas glitz. These days, they remain a key part of the armoury of Bollywood, the context in which you’re most likely to see them.